Single dish mode observations will be performed in L2 point. They suggest two main breakthrough projects: Origin of life in the Universe and CMB spectral distortions. In addition, other scientific tasks will be addressed during this part of the mission.

1. Origin of life in the Universe

Currently we know that life exists only on Earth. Which circumstances made our planet habitable? In particular, it is important to understand, how water, the key ingredient of life, appeared on Earth. The place at which our planet is located is quite hot, and by the time of formation Earth should have been dry, according to current theories. Was the whole content of oceans brought on Earth by comets? That’s the question which can be directly answered by observing FIR spectra of comets and other Solar System bodies and comparing the isotopic composition of water in these bodies. These studies can hardly be done from the surface of the Earth, since water in our atmosphere spoils the results.

We know now that a lot of other planetary systems exist. Which fraction of these planets could posses liquid water? To answer this question Millimetron will observe places where new planetary systems form, so called protoplanetary disks, and derive the distribution and evolution of water and ice in them.

FIR range hosts a lot of spectral lines of complex organic molecules, among them one can meet pre-biotic ones. Obvious significance of detecting such bio-tracers in the interstellar medium would indicate that life in our Galaxy and therefore in the Universe is a universal phenomenon. Another important problem related to origin of life is the so-called chirality – life on Earth is based on left-handed amino acids and on right-handed sugars. Nobody knows where this pure chirality comes from. If it will be detected in the interstellar molecular clouds it might mean any life in the Milky Way has the same chiraility as we do. This is a challenging problem and the spectral and polarimetric facilities Millimetron will offer seem sufficient to solve this problem. 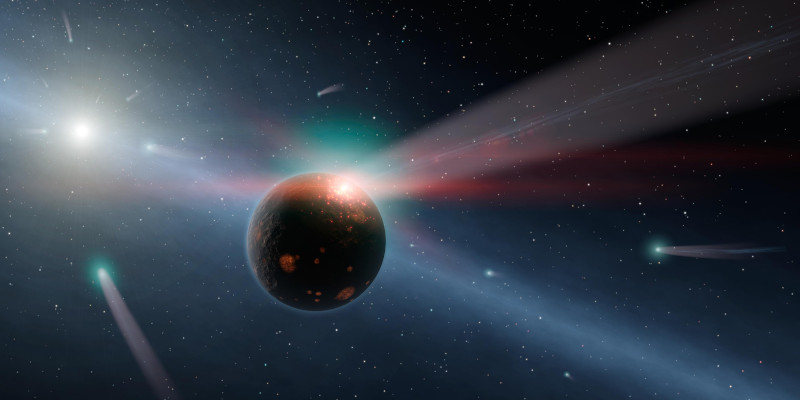 Spectral distortions of the cosmic microwave background (CMB) are the next frontiers in the modern cosmology. Since the first studies of CMB frequency spectrum it was found that with great accuracy it coincides with the blackbody shape. Nevertheless, in the pre-recombination era there were physical processes accompanied by energy release. These processes should inevitably leave a trace in the CMB spectrum in the form of very characteristic distortions (deviations from the blackbody spectrum). Such distortions contain unique information about phenomena in the early Universe associated with possible deviations from thermodynamic equilibrium caused by decaying or annihilating particles, dissipation of acoustic waves, primordial black holes, cosmic strings and so on. Therefore, the detection of such distortions can shed light on the processes that took place over a vast window in cosmological history: from redshift 2000000 up to 1000.

In the early Universe during pre-recombination era at redshifts less than 2 000 000 the effects of double Compton scattering and bremsstrahlung become negligible. Thus, starting from this moment, the total number of photons remains unchanged and any injection of energy into the plasma leads to spectral deviations from the blackbody shape. Early type distortions appear at redshifts 2 000 000 > z > 10 000 and called \mu-distortions. They have Bose-Einstein spectral shape with non-zero chemical potential. Any injection in a later era leads to the existence of y-distortions. This type of distortions look pretty much like Sunyaev–Zeldovich (SZ) effect.

Detection of mu- and y-distortions by Millimetron suggests deep observations of small (less than 1x1 degree) and cleanest parts of the sky. It also implies approximately 1 Jy/sr sensitivity and a very accurate separation of foregrounds from the signal.