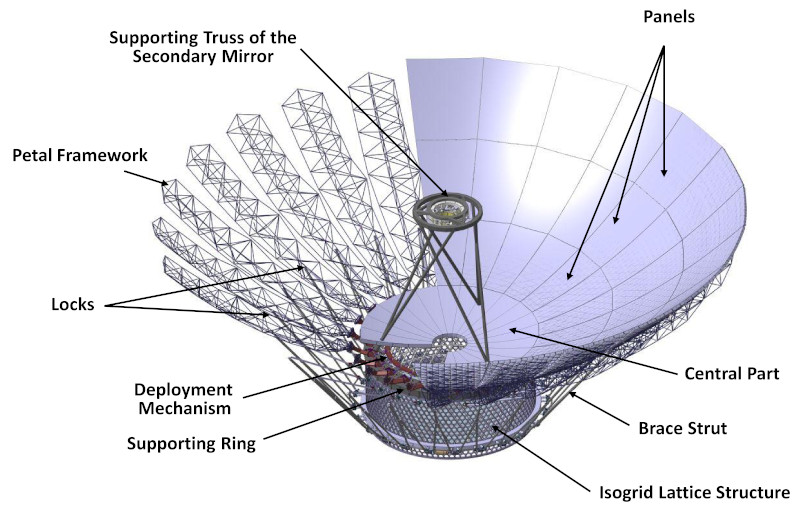 The primary mirror is too large for existing fairings hence it has structure of segmented deployable solid reflector. Thus, the primary mirror of Millimetron Space Observatory has the solid central part (3 meters in diameter) and 24 deployable petals, which will unfold in orbit.

The unique parameters of the antenna will be provided by the several design solutions for the primary mirror:

These solutions will allow to correct a misalignment, associated with the processes of deployment, and distortion of the surface, caused by thermo-elastic and hygroscopic effects. 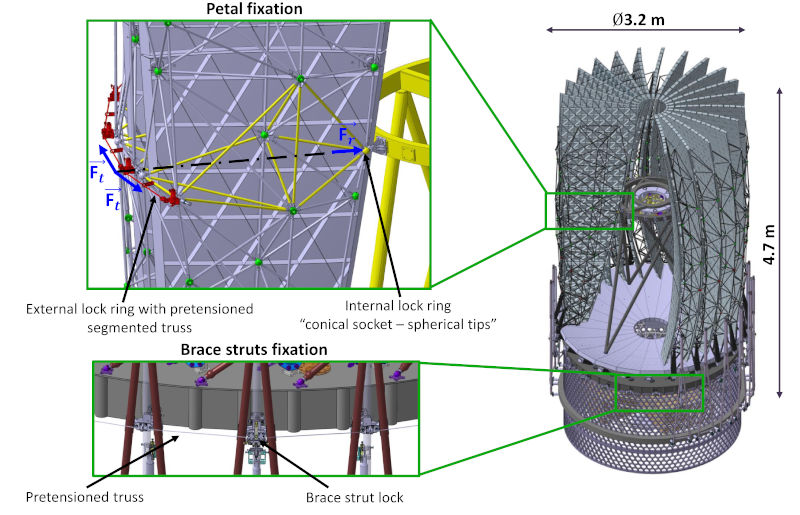 In folded configuration the primary mirror is held in place by two fixation rings: internal and external. The internal fixation ring is located on the supporting truss of the secondary mirror. This ring contains 24 spherical tips. At the same time, each petal framework contains conical socket, which is resting upon matching spherical tip. The external fixation ring wraps the petal frameworks on the same level as internal. The fixation is organized by pre-tensioned cord, which keeps all locks between petals in the latched state. Upon the activation of pyrotechnic charge, the pre-tensioned cord will be cut and will release the petals for opening.

The concept of the Millimetron primary mirror deployment is based on the previous successfully implemented antenna of Radioastron project. Folding and deployment of the petals is carried out in one operation – rotation along one axis through synchronous system. Such approach reduces the complexity and improves the accuracy of the deployment mechanism. In addition, that provides sufficient space, needed to ensure additional rigidity of the petal framework and sufficient packing density of the petals in folded position. Special latches will lock the petals to each other at their edges in operational configuration. Simultaneously, each petal is fixed with the corresponding brace strut via lock at its end. After unfolding the primary mirror must hold position of deployed petals with the accuracy better than 1 mm from pre-determined surface.

Time-lapse of the full-scale mock-up deployment

Due to the strict requirements for the form stability and the large size of the main mirror, it is important to control and check these parameters during and after the deployment process. Thus, to implement the verification plan it was necessary to produce a full-scale engineering mock-up of the primary mirror.

During the test program of this mock-up a set of crucial parameters and engineering solutions have been verified: deployment system performance in terms of deployment accuracy and repeatability, unique zero gravity system, the latching system of petals in the operational and transport position.

The panels have a sandwich structure comprised of the parabolic front facesheet, rear facesheet, ribs, mounting pins and interfaces for the thermal bridges. They are manufactured from carbon fiber reinforced plastic M55J/NIIKAM based on the high modulus carbon fiber and cyanate ester resin. For the front and rear facesheets quasi-isotropic layup is chosen whereas for ribs it’s orthogonal. The material offers low areal density combined with the high specific stiffness, low coefficient of thermal expansion, low moisture absorption and increased resistance to microcracking. To improve the longitudinal thermal conductivity of the panels, the heat-conducting layer of the pure copper foil (6 µm) on the rear surface is used. All that allows to create thermally stable and precision design with the minimal mass.

Parts of the panels are glued with cryoresistant adhesive which also features unique physical and mechanical properties as it has to be resistant to both high (≈ 100˚С, due to manufacturing technique) and extremely low (less than -250˚С, due to operational conditions) temperatures. 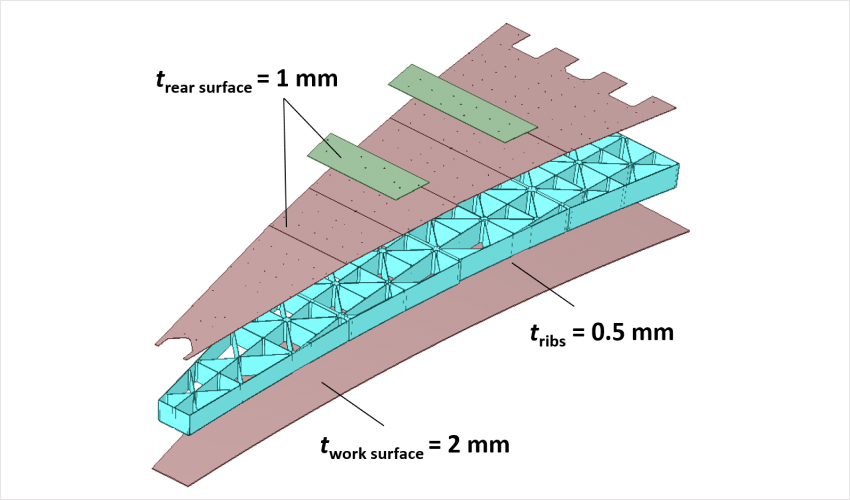 Structure of the panels (central panel is used as an example) 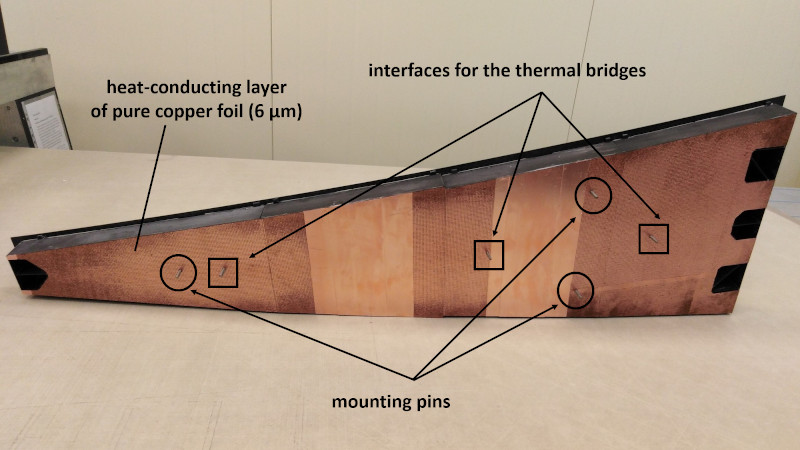 The photo of the central panel from the rear side 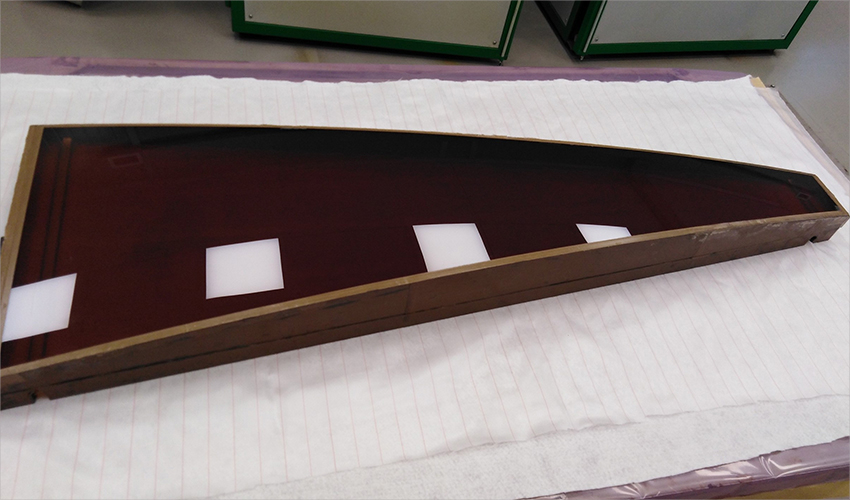 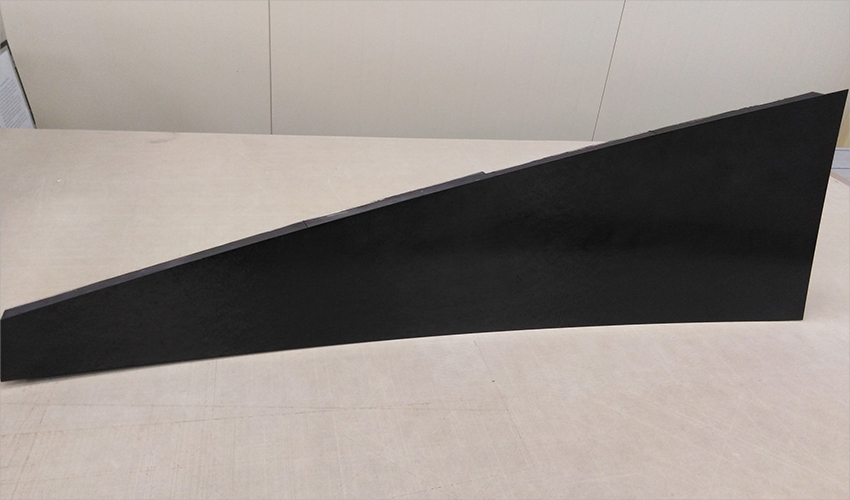